The Queen Consort is the daughter of Major Bruce Middleton Hope Shand and The Hon Rosalind Maud Shand (nee Cubitt), the daughter of 3rd Baron Ashcombe, who married on January 2nd, 1946 at St Paul’s, Knightsbridge.

She was born Camilla Rosemary Shand on July 17, 1947 at King’s College Hospital, London, the eldest of three children. Her Majesty has a sister, Annabel Elliot; her brother, Mark Shand, died in 2014.

When Camilla married Prince Charles (now King Charles III) at the Guildhall in Windsor on April 9, 2005, she brought some French blood to the British royal family.

The Queen Consort was previously married to Brigadier Andrew Parker Bowles and the marriage was dissolved in 1995. The couple had two children, Thomas Henry and Laura Rose, born in 1974 and 1978 respectively. Charles III is godfather to Tom Parker Bowles.

from France to the British royal family…

perche-quebec.com has climbed the branches of Her Majesty The Queen's genealogical tree until her French roots. To find the trace of the French ancestors of the Queen Consort, it is not necessary to cross the English Channel but to cross the Atlantic Ocean and to join Canada as William Coutts Keppel, one of the great-great-grandfathers of Camilla, did it.

Lieutenant-colonel William Coutts Keppel, 7th Earl of Albemarle, was born in London on April 15, 1832. He married Sophia Mary MacNab on November 15, 1855 in Hamilton (Ontario-Canada). She is the daughter of Mary Stuart and Sir Allan Napier MacNab (1798-1862) who served as joint Premier of the Province of Canada from 1854 to 1856.

In Mary Stuart's family tree, we discover her great-grandmother Marie Josephe Guyon born in Grondines in Quebec on October 13, 1715 and whose three great-grandparents were emigrants from Perche (France):

Those family ties between Her Majesty and the Percheron emigrants are the reflection of the official registers. However, the paternity of the maternal grandmother of Queen Camilla, Sonia Rosemary Keppel, is being disputed. Alice Frederica Edmonstone, Camilla's great-grandmother, married George Keppel, son of William Coutts Keppel, on June 1, 1891. After having given birth to a first daughter Violet on June 6, Alice became in 1898 and during the next twelve years the mistress of The Prince of Wales, who became King Edward VII of England on the death of Queen Victoria in 1901. Sonia, Alice's second daughter, was born on May 24, 1900 in London. Who is the biological father of Sonia? Nobody can say it with certainty. Legally it was decided when George acknowledged Sonia as his child and gave her his name (Keppel). Thus officially, Queen Camilla has Percheron-French blood and Celine Dion and Madonna are her cousins.

Her Majesty has ten pioneer ancestors originating from Perche (France). All immigrated in the 17th century.

In addition to Perche, three other French regions are represented in the family tree of Her Majesty the Queen Consort:
• Brittany: Guillaume Couillard, sailor & carpenter for the Compagnie des Marchands, born in 1538 in Saint-Malo.
• Paris: Louis Hebert, apothecary, known as the first pioneer to settle in New France, born in 1575 in Paris. His daughter Guillemette will marry Guillaume Couillard.
• Poitou-Charentes: Michel Coursolle born in La Flotte (Île de Re) in 1707 who married Marie Josephe Guyon in 1739 in Vercheres (Quebec); Madeleine Emard born in Niort (Deux-Sèvres) around 1626 who married the Percheron pioneer Zacharie Cloutier Jr. in 1648 in La Rochelle; the couple Pierre Guillet born around 1628 (Aunis) and Jeanne Saint-Pair born in 1627 in Saint-Jean-d'Angely (Charente-Maritime); Etienne Lafond born around 1615 in Saint-Laurent-de-la-Barriere (Saintonge) who married the Percheron Marie Boucher (1629-1706) in Quebec in 1645.

The French ancestry of Queen Consort Camilla is published by perche-quebec.com on Geneanet, an external website. Access to the entire database is free but after consulting some data, you must have a free Geneanet account to continue exploring genealogical data.

In the family tree of Her Majesty the Queen Consort, there is another French branch not related to Quebec but Brittany with Louise Renée de Penancoët de Keroual, Duchess of Portsmouth and Aubigny, born in September 1649 in Guilers (Finistère, France).

Coming from the Breton gentry, Louise moved to the court of Louis XIV in Versailles to become maid of honor to Henriette of England, wife of the Duc d’Orléans, Louis XIV’s brother, who is best known as Monsieur. The Sun King made her his agent of influence in England to defend the interests of France and Catholicism there. In 1670, Louise de Keroual accompanied Madame on a diplomatic visit to her brother, the King of England Charles II. She was noticed by the English sovereign and became his favorite mistress for about fifteen years. In 1672, this liaison gave birth to an illegitimate child Charles Lennox who will be recognized and ennobled; he was created Duke of Richmond in 1675.

In 1685 on the death of Charles II, Louise de Keroual returned to France. She settled in Brest then retired to her land in Aubigny (Berry) which was once the land of the Stuarts in France. She died in Paris in 1734.

perche-quebec.com has discovered that Her Majesty the Queen Consort has many family ties with other celebrities in politics (Hillary Clinton, Justin Trudeau), the film industry (Xavier Dolan, Ryan Gosling, Angelina Jolie) and in music (Madonna, Celine Dion, Justin Bieber, Alanis Morissette). All those celebrities have in common French-Canadian pioneers, and in particular Percheron pioneers.

For instance, Jean Guyon, the direct ancestor of Celine Dion and the Percheron pioneer Zacharie Cloutier, an ancestor of most of the celebrities mentioned before, who was born in Mortagne-au-Perche (Orne, France).

As strange as it may seem, there is nothing exceptional about those family ties. As the Percheron pioneers were among the very first French settlers to arrive in what was then known as New France, most of people with French-Canadian ancestry have Percheron blood and are more or less related. 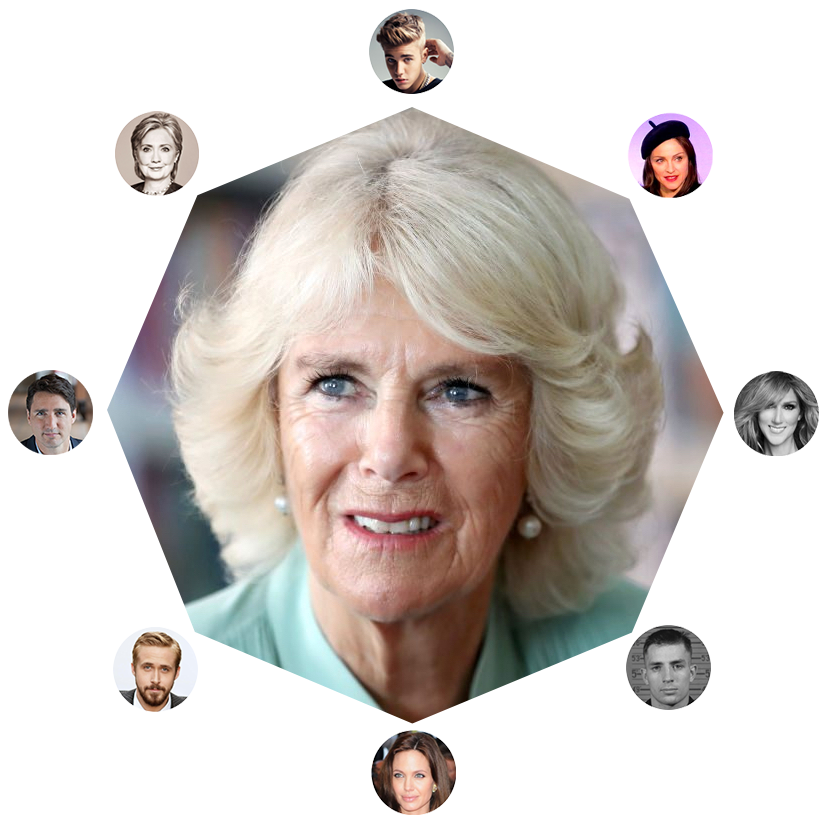 source & infographics perche-quebec.com
The Queen Consort has many family ties with the famous descendants of those Percheron pioneers.