Celine Dion was born on March 30, 1968 at Hospital Pierre-Le-Gardeur in Repentigny (Quebec), near Charlemagne where her parents, Adhemar Dion (1923-2003) and Marie Therese Tanguay (1927-2020) lived. She is the younger son of a family that already had 13 children and whose child, Denise, was born 22 years earlier in 1946. Her parents of French-Canadian origin were married on June 20, 1945 in La Tuque (Mauricie, Quebec).
On December 17, 1994, at the Notre-Dame Basilica of Montreal, Celine Dion married Rene Angelil, her impresario born on January 16, 1942, to a father of Syrian descent and a mother whose family was of Lebanese origin. The couple has three sons: Rene-Charles (2001) and the twins Nelson and Eddy (2010). On January 14, 2016, Rene Angelil died of cancer at home in Las Vegas.

From Perche to Las Vegas… 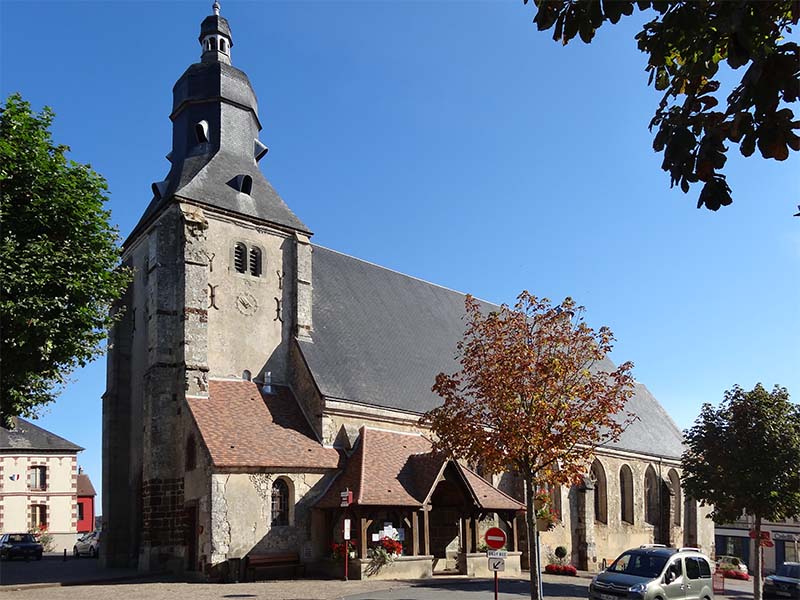 The direct paternal ancestor of Celine Dion, Jean, was named « Guyon ». He was a mason who spent his career in Mortagne (Perche, Orne, France) up to 1634, year of his departure to "La Nouvelle-France" in Canada.

September 18th 1592! While Henri IV tried to conquer his Kingdom, the parish of Tourouvre in Le Perche has been the scene of a modest event. On the parish registers, the priest records the baptismal certificate of a new parishioner in latin: « Johannes filius Jacobi Guyon er Maria eus uxoris... ». His father is a notable, his mother is Marie Huet.

We do not know precisely how his childhood liked like but we found his name mentioned on an act of May 18th, 1614 when he lent money to a ploughman of Autheuil.

One year later, the priest of the parish Saint-Jean de Mortagne writes on a register: "On June 12, 1615, Jehan Guyon, of the parish Tourouvre, and Mathurine Robin, of this parish, were married."

At 42 years old, ten days after the birth of his last child, Jean Guyon will yield to the proposals of Robert Giffard, doctor, cantor of the emigration to Quebec and decides to leave France to make colony in New-France.

In March 1634, Jean and his family, except for his daughter Barbe and his son-in-law who will join the rest of the family in Beauport in 1652, leaves Mortagne. Embarked in Dieppe, the Guyon family will arrive, after two months of sailing, to the mouth of the Saint-Laurent river in June 1634.

Years after years, his children and descendants gave birth to generations of Guyon, renamed Guion or Dion. They are settled in Quebec, Canada and in the United States. Adhemar Dion, father of Celine, native from Charlemagne, is a descendant of Jean Guyon, the first son of the pioneer mason. 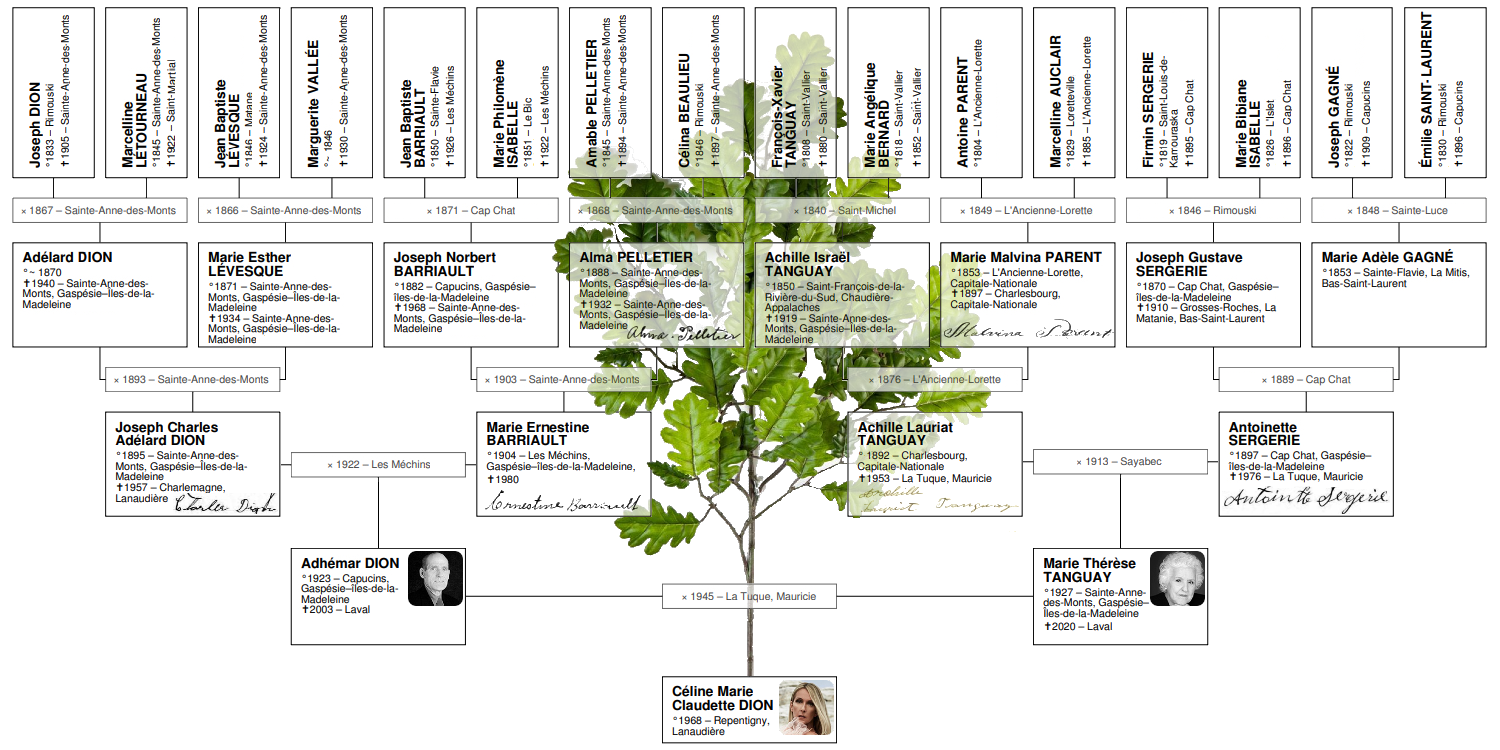 The ancestry of Celine Dion is published by perche-quebec.com on Geneanet, an external website. Access to the entire database is free but after consulting some data, you must have a free Geneanet account to continue exploring genealogical data. 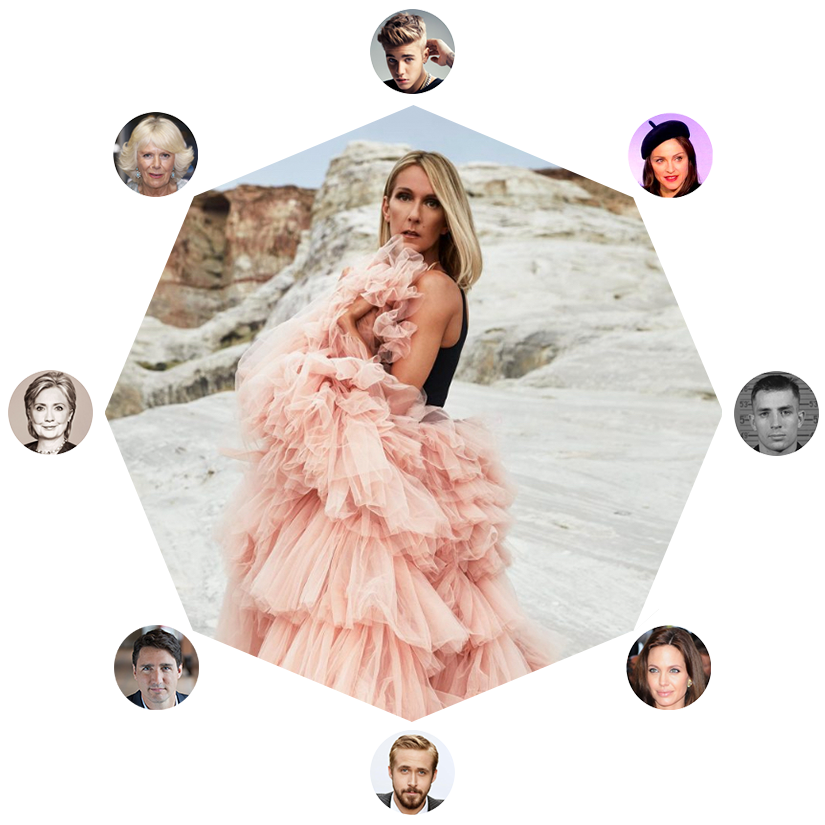 source & infographics perche-quebec.com
Celine Dion has many family ties with the famous descendants of those Percheron pioneers.

The patrilineal and matrilineal lines of Celine dion connect to a single couple!

The matrilineal line is the one of a woman and her female ancestors. It is the lineage of the mother, the mother’s mother, the mother’s mother’s mother, etc. over a certain number of generations. This line is most certainly the one which raises the fewest doubts in a family tree. If a man recognizes a child as his own at the time of the birth, it is more difficult for a woman to hide her pregnancy, even if exceptions do exist. Sometimes a grandmother declares being the mother of a child to save the family's reputation as well as her daughter's.

The patrilineal line climbs up the family tree from father to father, it is the one through which the family name is generally passed on. In the case of Celine Dion, the family name has evolved over the generations from Guyon to Dion.

The Percheron ancestors of Celine Dion

Besides Jean Guyon, the direct ancestor of Celine Dion born in Tourouvre, Celine Dion has many ancestors whose the origin is Perche. All immigrated in the 17th century.


notes
[*]  Estimated year
[1]  The place of origin is not known. To some, Jean Cote was originated from Mortagne-au-Perche but there is no documented evidence.
[2]  Guillaume Fournier may be originated from Coulimer or Coulmer, both villages located in Orne (France). Coulimer is part of Perche but not Coulmer. The surmane Fournier is still used in Coulimer today but not in Coulmer.
[3]  There is no documented evidence that Eloi Tavernier moved to Canada. According to Mrs. Montagne, he attended the wedding of his daughter Marguerite on May 1, 1644 in Quebec, but according to PRDH, he is not mentioned in the marriage record.