When Madonna came to Quebec in 1987 for the «Who's That Girl Tour» , she revealed that her mother was French-American. Suddenly, genealogists started researches. "It took more than two years mainly because Michigan has no marriage registers like in Quebec" explains Rene Jette. This Canadian professor from Montreal University, author of a dictionary of the families of Quebec that makes authority, made team with an American colleague Gail F. Moreau-DesHarnais. They published in 1994 the fruit of their research in the magazine Michigan's Habitant Heritage, Journal of the French-Canadian Heritage Society of Michigan from which the following family tree is extracted. 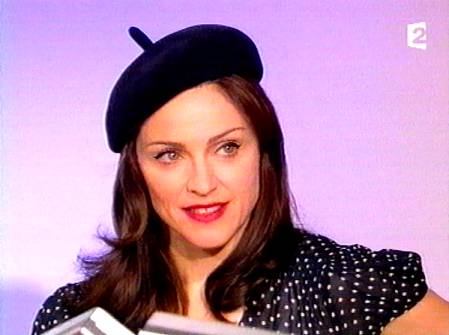 Madonna Louise Ciccone (a.k.a. Madonna) was born on August 16, 1958 in Bay City, Michigan, located near the base of the Saginaw Bay on Lake Huron. She was the third of six children in a Catholic family.

Her father, Silvio Anthony Ciccone (a.k.a. Tony), was an Italian American design engineer for Chrysler/General Dynamics. He has his roots in L'Aquila in the Abruzzo region (Italy). He married a French Canadian descent, Madonna Louise Fortin, on July 2, 1955 in Bay City. The family lived in a small brick house in Pontiac, Michigan.

Madonna’s mother died of breast cancer in 1963 when Madonna was five years old. A few years later, her father married their housekeeper Joan Gustafson and had two more children.

Willard and Elsie Fortin, the maternal grandparents of Madonna, are direct descendants of Julien Fortin dit Bellefontaine, the first Fortin who settled in New France in 1650. He was from the parish Notre-Dame-de-Vair, today part of the village Saint-Cosme-en-Vairais (Sarthe, France). 90% of the American Fortin descend from Julien Fortin. The Fortins are today the ninth largest family in Quebec. 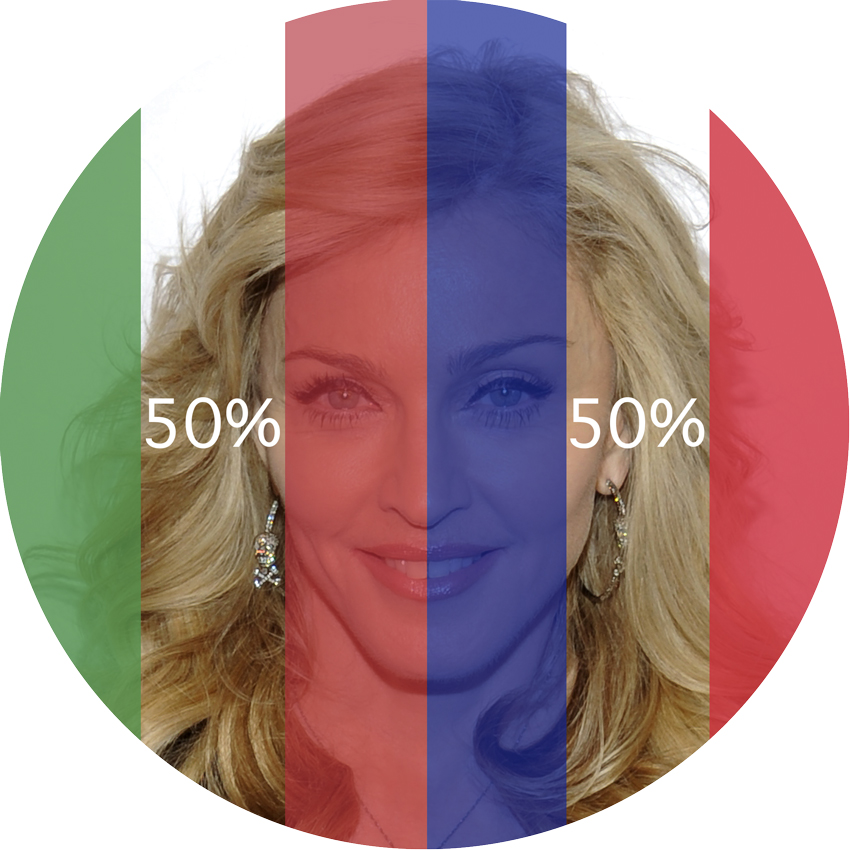 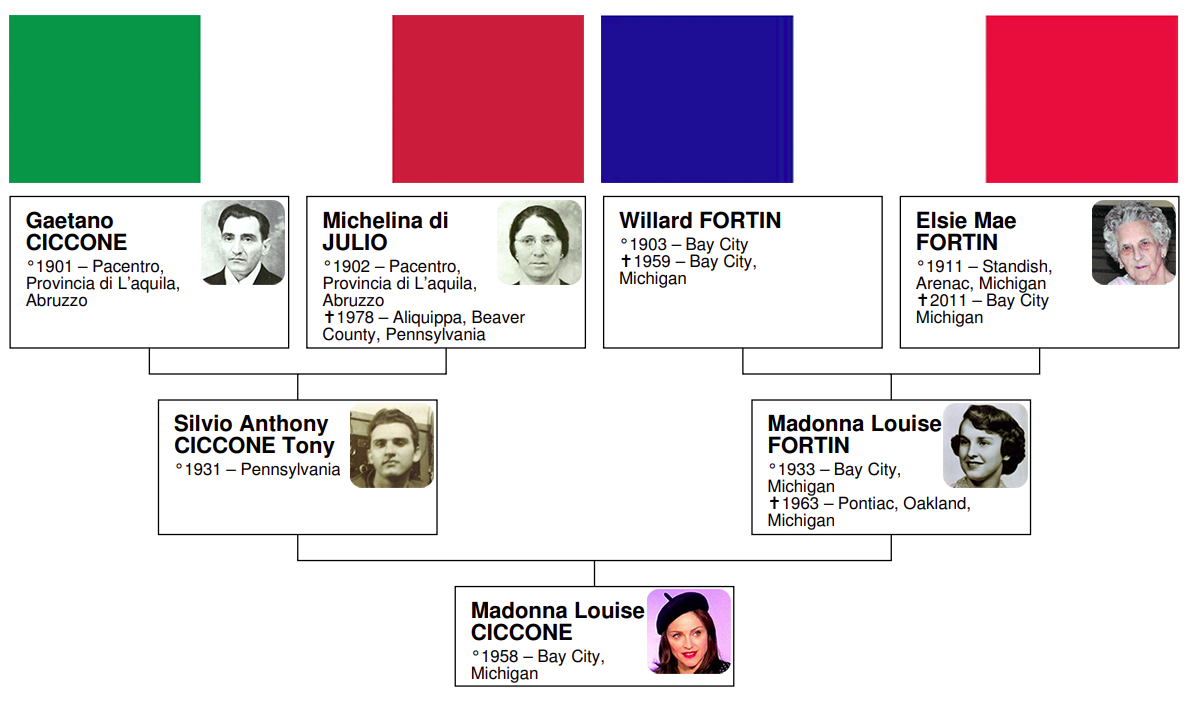 infographics perche-quebec.com
The ethnic breakdown of Madonna’s ancestry is:
50% Italy on the father's side
50% France (through Quebec) on the mother's side

The French-Canadian ancestry of Madonna is published by perche-quebec.com on Geneanet, an external website. Access to the entire database is free but after consulting some data, you must have a free Geneanet account to continue exploring genealogical data. From Perche (France) to Michigan…

Madonna’s grandmother, Elsie Fortin, has died on Wednesday, March 8, 2011. She was just three months away from turning 100 years old.

Fortin lived in on North Dean Street in Bay City where she passed away. She was born in Standish, Michigan. She married a distant cousin William Fortin in November of 1929. She had eight children, 36 grandchildren, 47 great grandchildren, and 6 great-great grandchildren. To read her full obituary, click here.

The single patronym FORTIN of Madonna's maternal grandparents covers two parallel adventures of French-Canadian immigrants to Michigan at the end of the 19th century. At that time, it was hard to find a job for the French-speaking Canadians and many tried their chance in the West.

Both branches of Fortin who settled in Michigan had the same origin in Quebec. In the early 18th century, Louis Fortin got married for the first time with Anne Bosse at Cap-Saint-Ignace in 1714. They gave birth to Claude Fortin, ancestor of the maternal grandmother of Madonna, Elsie Fortin.

In 1735, Louis Fortin got married for the second time with Madeleine Langelier; their son, Augustin Fortin, is the ancestor of Willard Fortin, the maternal grandfather of Madonna.

This Louis Fortin is the grandson of the first Fortin who arrived in 1650 in New France: Julien Fortin born in the parish Notre-Dame-de-Vair, part of the village Saint-Cosme-en-Vairais, (Sarthe, France) today.

perche-quebec.com has discovered that Madonna has many family ties with other celebrities in music (Celine Dion, Justin Bieber), politics (Hillary Clinton, Justin Trudeau), the film industry (Ryan Gosling, Angelina Jolie) and royalty (Camilla, Queen Consort of the United Kingdom)! All those celebrities have in common French-Canadian pioneers, and in particular Percheron pioneers. 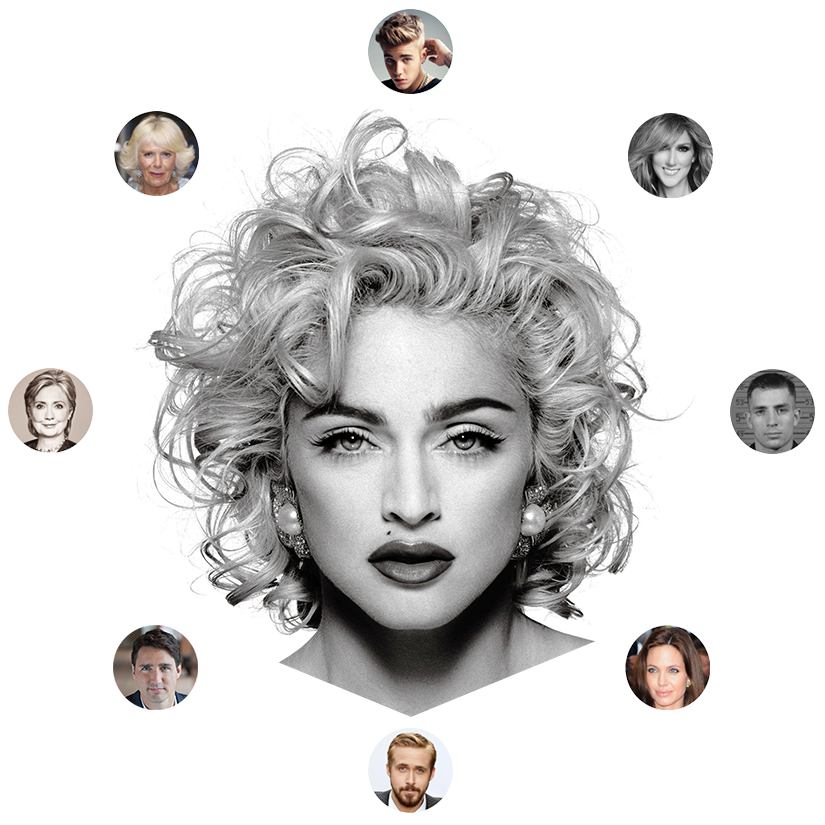 source & infographics perche-quebec.com
The Material Girl has many family ties with the famous descendants of those Percheron pioneers.

The Percheron ancestors of Madonna

Besides Julien Fortin dit Bellefontaine, the direct ancestor of Madonna born in Saint-Cosme-en-Vairais, (Sarthe, France), Madonna has many ancestors whose the origin is Perche. All immigrated in the 17th century.

notes
[*]  Estimated year
[1]  Jean Cote's place of birth is unknown. Some believe that he came from Mortagne-au-Perche (Orne , France) but no register has been found to confirm this hypothesis yet.
[2]  Guillaume Fournier may be originated from Coulimer or Coulmer, both villages located in Orne (France). Coulimer is part of Perche but not Coulmer.
[3]  There is no documented evidence that Eloi Tavernier moved to Canada. According to Mrs. Montagne, he attended the wedding of his daughter Marguerite on May 1, 1644 in Quebec, but according to PRDH, he is not mentioned in the marriage record.