Stéphane Dion is a distinguished Canadian diplomat, public servant and academic, born on September 28, 1955 in Quebec City. He studied at Université Laval before obtaining a Doctorate in Sociology from the Institut d’études politiques in Paris, France.

On June 1, 2022, the Prime Minister, Justin Trudeau, announced the appointment of the Honourable Stéphane Dion as Canada’s Ambassador to France. Mr. Dion remains the Prime Minister’s Special Envoy to the European Union and Europe, a position he has held since 2017. He is also accredited to Monaco.

Prior to this role, Stéphane Dion was Canada’s Ambassador to Germany from 2017 to 2022. He served as Minister of Foreign Affairs in the Cabinet headed by Justin Trudeau from 2015 to 2017.

In 2006, he became Leader of the Official Opposition in the House of Commons, a position that he retained until 2008. Mr. Dion was previously Minister of the Environment from 2004 to 2005. He served as a Member of Parliament first in 1996, representing Saint-Laurent—Cartierville, and was re-elected seven consecutive times.

Before entering politics, Mr. Dion taught Political Science at Université de Moncton in 1984, then at Université de Montréal from 1984 to 1995. He has authored many scientific articles and books on public administration, organizational studies, political institutions, and environmental policies.

A dual citizenship (French and Canadian)

His father Leon Dion (1922-1997), a well-known professor, married to Denyse Kormann (1929-2010) on June 4, 1951 in Paris (France). Stéphane Dion and his three brothers and one sister all have dual Canadian-French citizenship, obtained via his mother Denyse who was born in Paris. 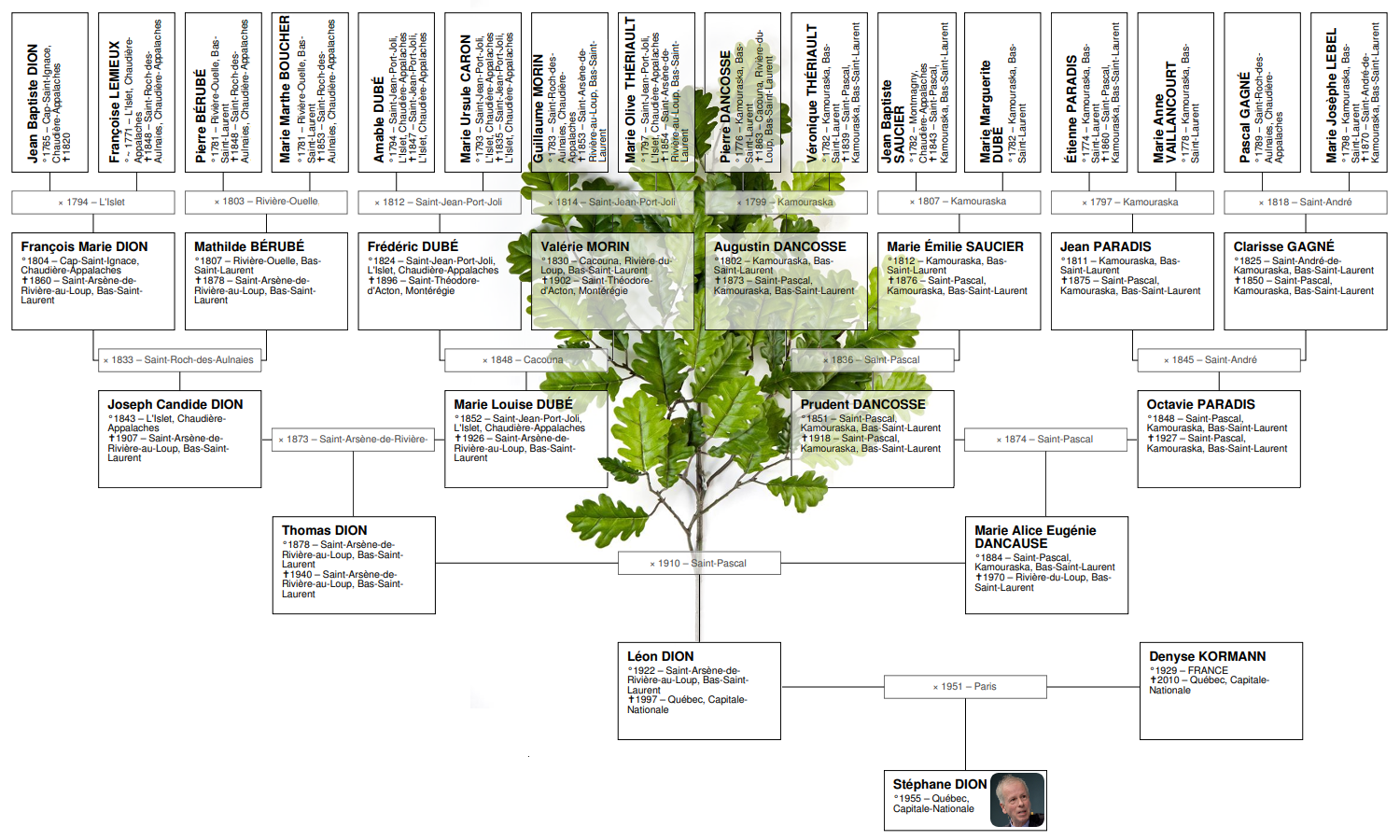 The Ancestry of Stéphane Dion is published by perche-quebec.com on Geneanet, an external website. Access to the entire database is free but after consulting some data, you must have a free Geneanet account to continue exploring genealogical data. 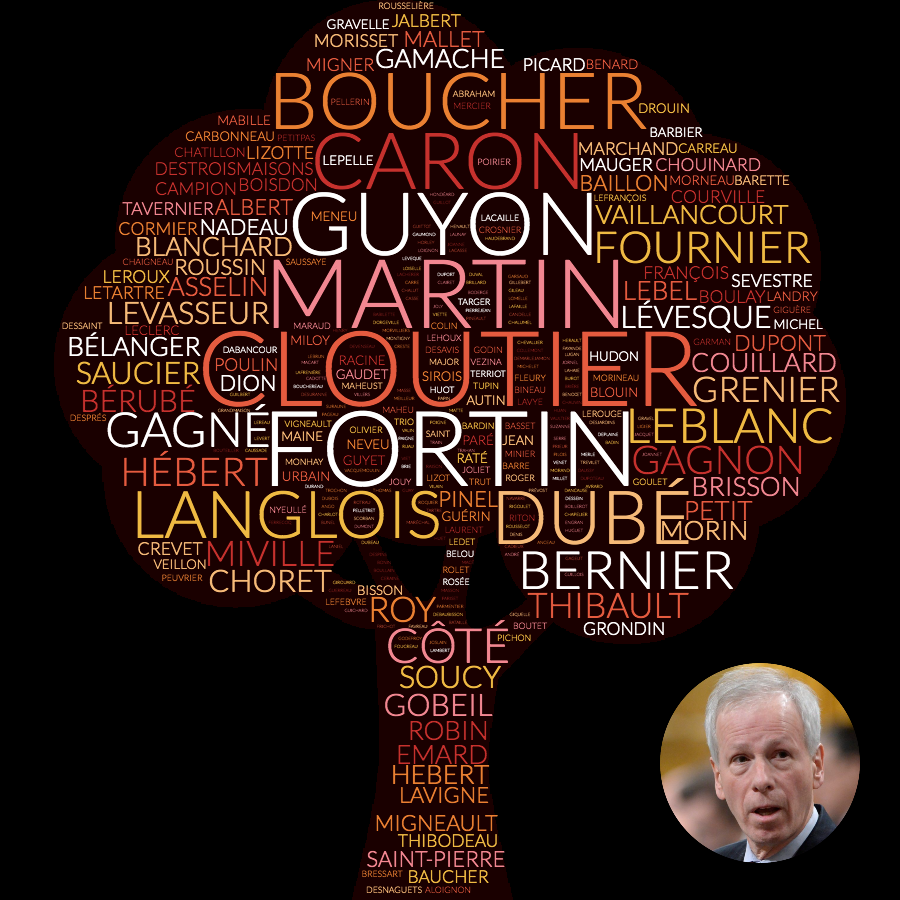 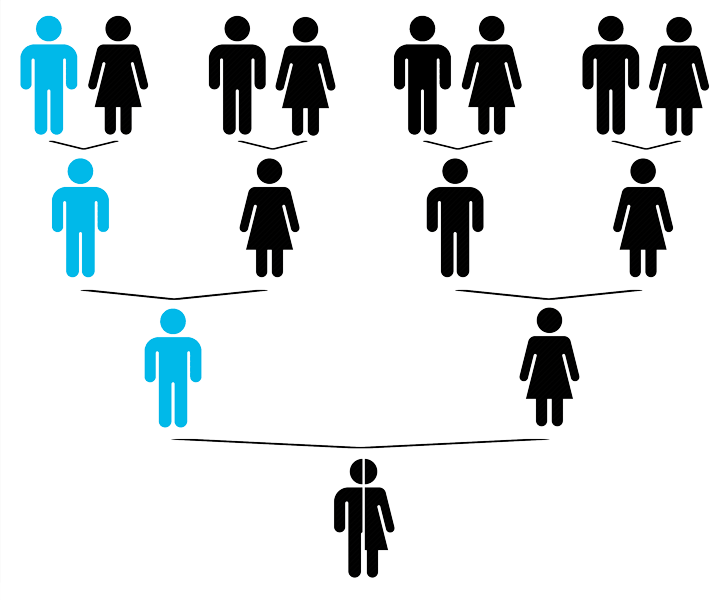 As Celine Dion, Stéphane Dion is a descendant of the Percheron pioneer Jean Guyon baptized in Tourouvre (Orne, France) in 1592.

The Patrilineal (male) line is the one through which the family name is generally passed on. In the case of Stéphane Dion, the family name has evolved over the generations from Guyon to Dion.

The Percheron ancestors of Stéphane Dion

Besides Jean Guyon, the direct ancestor of Stéphane Dion born in Tourouvre, Stéphane Dion has many ancestors whose the origin is Perche. All immigrated in the 17th century.

notes
[*]  Estimated year
[1]  The place of origin is not known. To some, Jean Cote was originated from Mortagne-au-Perche but there is no documented evidence.
[2]  Guillaume Fournier may be originated from Coulimer or Coulmer, both villages located in Orne (France). Coulimer is part of Perche but not Coulmer. The surmane Fournier is still used in Coulimer today but not in Coulmer.
[3]  There is no documented evidence that Eloi Tavernier moved to Canada. According to Mrs. Montagne, he attended the wedding of his daughter Marguerite on May 1, 1644 in Quebec, but according to PRDH, he is not mentioned in the marriage record.