On the road to the French ancestors of Jack Kerouac

Jack Kerouac was born on March 12, 1922 in Lowell (MA). He is the third son of French Canadian parents, Joseph Alcide Leon Kirouack (also known as Leo-Alcide Keroack) and Gabrielle-Ange Levesque. There is some confusion surrounding his name, partly because of variations on the spelling of Kerouac, and because of Kerouac's own statement of his name as Jean-Louis Lebris de Kerouac.

His reason for that statement seems to be linked to an old family legend that the Kerouacs had descended from Baron François Louis Alexandre Lebris de Kerouac. Kerouac's baptism certificate lists his name simply as Jean Louis Kirouac, and this is the most common spelling of the name in Quebec. Research has shown that Kerouac's roots were indeed in Brittany (France), and he was descended from a middle-class merchant colonist, Urbain-François Le Bihan, Sieur de Kervoac, whose sons married French Canadians.

The paternal ancestor of Jack Kerouac is Urbain-François Le Bihan de Kervoach, son of a royal notary, born in Huelgoat in Brittany (France). Unique ancestor of the Kirouac in New France, he identified himself and signed Maurice-Louis-Alexandre Le Bris de Kervoach, at his marriage to Louise Bernier, October 22, 1732, in Cap-Saint-Ignace, Quebec. According to the association of Kirouac family, it was the discovery in Quebec of archival documents signed by these two names that resolved the enigma. New genealogical research has allowed Patricia Dagier to explain the reasons for the change of patronymic of the ancestor of Jack Kerouac and to put an end to the confusion that surrounded this question. They also explained the fact that Jack Kerouac, born and baptized "Jean-Louis Kirouac", had himself opted for a change of name by declaring to be called "Le Bris de Kerouac". This information, hitherto ignored by most of his biographers, sheds new light on the writer and part of his work and forms the framework of the biography Jack Kerouac, Breton d'Amerique, by Patricia Dagier and Herve Quemener (Le telegramme, March 2009).

Jack Kerouac talks about his French-Canadian parents and his childhood

The French-Canadian ancestry of Jack Kerouac is published by perche-quebec.com on Geneanet, an external website. Access to the entire database is free but after consulting some data, you must have a free Geneanet account to continue exploring genealogical data. 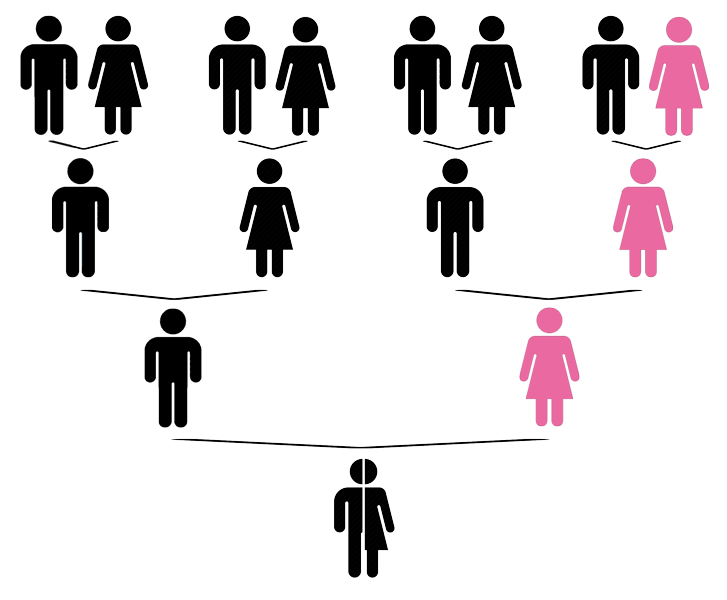 Matrilineality is the tracing of kinship through the female line. A matriline is a line of descent from a female ancestor to a descendant (of either sex) in which the individuals in all intervening generations are mothers – in other words, a "mother line". It is also sometimes known as the enatic, uterine or umbilical line. This matrilineal descent pattern is in contrast to the more common pattern of patrilineal descent from which a family name is usually derived. Such a mother line is the most certain line in a family tree; indeed, if a man has to recognize a child as his own at birth, it is more difficult for a woman to hide her pregnancy, although there are existing exceptions.

The examination of Jack Kerouac's matrilineal ancestry leads us directly in Perche towards the pioneer Mathurine Robin, born in Mortagne-au-Perche at the end of the XVIth century, wife of Jean Guyon, the direct paternal ancestor of Celine Dion!

The Percheron ancestors of Jack Kerouac

Even if his direct ancestor Urbain-François Le Bihan de Kervoach is from Brittany, Jack Kerouac has several ancestors whose the origin is Perche. All immigrated in the 17th century.


notes
[*]  Estimated year
[1]  The place of origin is not known. To some, Jean Cote was originated from Mortagne-au-Perche but there is no documented evidence.
[2]  Guillaume Fournier may be originated from Coulimer or Coulmer, both villages located in Orne (France). Coulimer is part of Perche but not Coulmer. The surmane Fournier is still used in Coulimer today but not in Coulmer.
[3]  There is no documented evidence that Eloi Tavernier moved to Canada. According to Mrs. Montagne, he attended the wedding of his daughter Marguerite on May 1, 1644 in Quebec, but according to PRDH, he is not mentioned in the marriage record.