In the early 17th century, Perche (France) was the point of departure for many French emigrants, and a number of major families in Quebec - such as the Pelletiers, Gagnons, Tremblays, Rivards, Fortins, Bouchards and Drouins - can trace their roots back to this particular region.

Perche is located 100 miles West of Paris. Today, it is not an official administrative subdivision of France, but a beautiful region with a rich history.

The County of Perche was created in 1115 when the County of Mortagne was combined with the seigneuries of Nogent-le-Rotrou and Belleme. Before the French Revolution, it was part of the Province of Normandy. In 1792, when the 34 provinces of France were changed to 96 departements, Perche was included mostly within the Departments of Orne and Eure-et-Loir but small parts of Perche lie within the current departements of Sarthe, Eure and Loir-et-Cher. In 1998, the Parc Naturel Regional du Perche (Natural Park of Perche) was created.

Perche is a pastoral area consisting mainly of gently rolling farmland but, unlike much of France, it is blessed with some beautiful forests. It also benefits from a number of rivers and streams. The main cities are Nogent-le-Rotrou, Mortagne-au-Perche and Belleme.

Chronology of the Percheron emigration in New-France

« If the contribution of Perche to the settlement of Canada -- approximately 5% of the French emigrants -- can appear modest, it should be stressed that the Percheron emigration, the oldest one, is characterized by a remarkable prolificity… », wrote Francoise Montagne.

The movement, launched in 1634 thanks to the capacity of conviction of Robert Giffard, represents a certain originality in the French emigration to New-France. It should not be due to misery, but rather to the spirit of adventure. In about forty years, 194 adults who had various jobs, often related to construction (mason, carpenter, brick-maker, etc), undertook the great voyage. Some returned to live and work in their native country but the great majority, despite the Iroquois threat, chose to settle on the banks of the Saint Lawrence River in order to clear and thrive the new territories. Their descendants are estimated today at 1.500.000 people in Canada and much more if we include the United States.

The apothecary Hebert and his family settle in Quebec City.

Robert Giffard, an apothecary in Tourouvre, native of Autheuil, perhaps a friend and classmate of Hebert, leaves for Canada and settles around Quebec.

Robert Giffard returns to France, convinced that the new colonists must settle on the banks of the Saint Lawrence River. The Company of the One Hundred-Associates is founded this same year. Noel Juchereau, a native of Tourouvre and a friend of Robert Giffard is one of the members of this company.

Robert Giffard marries Marie Renouard in Mortagne. As of spring, he goes again to New-France in order to prepare future establishments. The ship on which he boards is intercepted by pirates who are in the English's pay. Robert Giffard must return to France. In Tourouvre and Mortagne, he makes profitable this period to evoke the immense country which extends beyond the Atlantic.

France recovers Canada with the treaty of Saint-Germain-en-Laye. Robert Giffard can finally carry out his dream.

Robert Giffard, with the help of the brothers Jean and Noel Juchereau, prepares his expedition.

Robert Giffard gets the concession of the Seigneurie of Beauport by the Company of the One Hundred-Associates. He recruits his first colonists, receives the support of Pierre Le Bouyer de Saint-Gervais, civil general lieutenant and criminal of Perche.

Departure of Robert Giffard, his wife, his children and about thirty colonists for New-France. Among them Jean Guyon, master-mason, Zacharie Cloutier, master-carpenter and Robert Drouin, tile maker (native of Le Pin-la-Garenne). At the beginning of June, the ship reaches Quebec.

Samuel de Champlain dies in Quebec; the colony counts 132 colonists of which 35 come from Perche. In Mortagne, departure of new colonists of which Gaspard Boucher, his wife and his children. Among them Pierre, born in Mortagne in 1622, 13 years old. The first organized colonization of New-France is started. With regard to Perche, the main departures happen between 1634 and 1662. Some emigrants are mentioned at the end of the 17th century and in the 18th century.

Arrival in Quebec of Guillaume Pelletier (from Bresolettes). The population of the colony is 300.

Madeleine de la Peltrie (from Bivilliers) is present at the founding of Montreal.

Arrival in Quebec of 17 young people coming from Tourouvre and the surroundings.

Pierre Boucher returns to France and, in order to save the colony threatened by the Iroquois, requests the support of Louis XIV and Colbert. He returns to New-France bringing back many colonists.

Arrival in Quebec of the first « Filles du roi ». 770 young female emigrants were sent by King Louis XIV between 1663 and 1673, to populate his Canadian colony.

Arrival in Quebec of the regiment of Carignan-Salieres.

Robert Giffard dies in Beauport. The colony has 3000 inhabitants.

The Treaty of Paris brought to a close the Seven Years' War between Great Britain and France, and by which France ceded Canada to Great Britain.

As part of the Entente Cordiale celebrations, « La Capricieuse » flying the flag of France was proceeding upbound in the St. Lawrence River and generated enthusiasm with the French-Canadian descendants of the pioneers.

Visit to Mortagne and Tourouvre of Adelard Turgeon, Minister of Natural Resources and Forestry of Quebec.

Canada sends a strong contingent in France to fight alongside Allied troops. In April 1917, the Battle of Vimy Ridge proved to be a great success, but it only came at a heavy cost. The some 100,000 Canadians who served there suffered more than 10,600 casualties, nearly 3,600 of which were fatal.

Inauguration of a stained glass in the memory of Pierre Boucher, in the church Notre-Dame de Mortagne, in the presence of Pierre Dupuy, Canadian Government Delegate.

Participation of Canadian troops in the Liberation of France.

H.E. Desy, Canadian Ambassador to France, and his wife Corinne Boucher from Boucherville, visit Tourouvre and opens the exhibition-fair in Mortagne.

Creation of Perche-Canada, a non-profit organization by Edouard Leboucher (1915-1985), founding president, the Reverend Canon Jean Aubry (1904-1986), general secretary and Fernand Fortin. Objective: welcoming the descendants of the Percheron settlers and a better historical and genealogical knowledge. This long-term endeavor was initiated by Ms. Françoise Montagne (1912-1993) and her husband M. Pierre Montagne (1902-1988). Since its foundation, Perche-Canada has affixed commemorative plaques to the churches where the pioneers of New France were baptized.

Number of Percheron settlers arrived in Quebec between 1621 and 1699 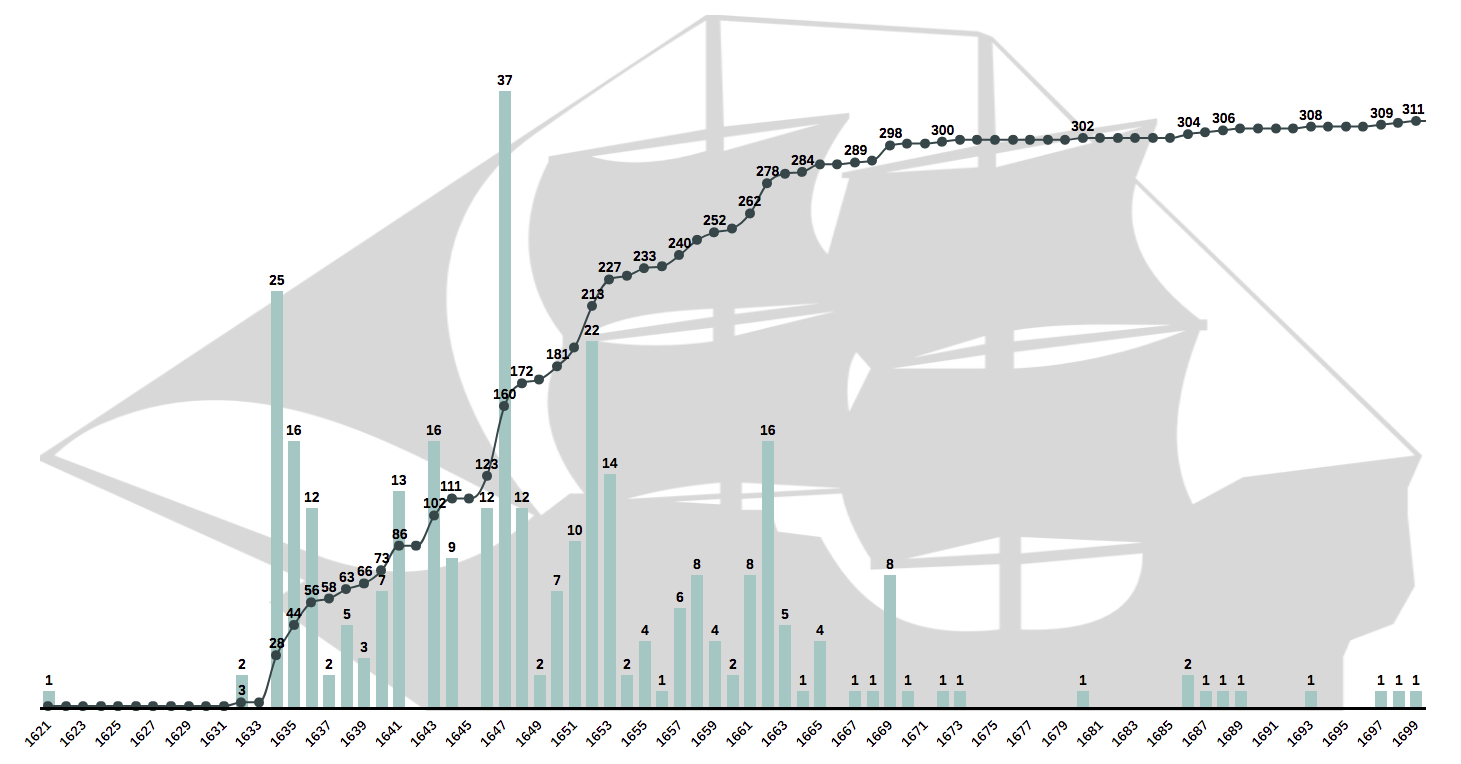 Museum of French Emigration to Canada

One house, many roots

La Maison de l'Emigration française au Canada (Museum of French Emigration to Canada) is an illustration of the special historical ties between Canada and France. It is located at Tourouvre, in Perche. It opened to the public on October 1st 2006.

A place for meetings and exchanges

Center for interpretation of French emigration to Canada, the museum wants to be an updated scientific knowledge on the phenomenon of French emigration before 1760, a meeting place, as well as a gateway open to the future and the development of new relationships. It benefits from strong ties to French and Canadian universities, since it is based on an important scientific research program (PREFEN) aimed at piecing together the circumstances surrounding French emigration in the 17th and 18th centuries. The data gathered through this program enrich the content provided to the public and ensure that the information presented is scientifically valid.

A place of memory, the museum aims at developing links between the French - whether they are from the Perche or elsewhere - and their descendants from North America, through exhibitions, meetings, genealogical exchanges, cultural events and activities for young people. Visitors will find information of a demographic and genealogical data to reconstruct the history and better understand the social and individual context of French emigrants who have left their country to build a new one.

Established in partnership with the Haut-Perche Community of Communes, the Government of Canada, the European Union, the French State, the Normandy Region and the Orne General Council, the House has a solid foundation with French and Canadian academic circles.

For more information (address, opening hours, contacts…), visit the site of The Museum of French Emigration to Canada

This five-year (2002-2006) research program was funded by the Canadian Government, in partnership with the CNRS, the Universite de Caen and the Conseil General de l'Orne. A number of French and Canadian universities are working together on the project, which is being overseen by a high-level scientific board.

The mission of PREFEN was to create a computerized database that would enable users to learn more about French emigration in the 17th and 18th centuries, a multi-disciplinary subject that brings history, demographics, anthropology and genetics into play.

Two tools were developed to carry out this program:
- a database establishing the identity of the 14,000 French citizens who settled permanently in Canada before 1760;
- an in-depth study of Perche region, which involved going through the archives of the townships of Tourouvre, Mortagne-au-Perche and Belleme: 330,000 notarial acts and 200,000 baptismal, marriage and burial certificates.

This research, drawn from various official documents from that time, made possible to more closely reconstruct the social and genealogical background of the French emigrants and help shed light on their family and social history, as well as their reasons for leaving their country.

Unfortunately due to a lack of financial means, the migrant database is offline since 2015.