Justin Trudeau is Canada’s 23rd Prime Minister and the leader of the Liberal Party.

Justin Trudeau was born at 9:27 pm EST on Christmas Day, 1971, at the Ottawa Civic Hospital, to Pierre Elliott Trudeau, who was, at the time, the 15th Prime Minister of Canada and Margaret Sinclair. Trudeau was christened with his father's niece Anne Rouleau-Danis as godmother and his mother's brother-in-law Thomas Walker as godfather at Ottawa's Notre Dame Basilica on the afternoon of January 16, 1972, which marked his first public appearance.

Justin Trudeau has three half-siblings, Kyle (1984) and Alicia (1988), from his mother's remarriage with Fred Kemper, and Sarah Elisabeth, from his father's later relationship with Deborah Coyne.

Justin Trudeau is predominantly of Scottish and French Canadian descent. Trudeau's grandfathers were businessman Charles-Emile Trudeau and Scottish-born James Sinclair who served as minister of fisheries from 1952 to 1957.

Some of his maternal grandmother's ancestors were colonists in Singapore, Indonesia, and Malaysia, including Francis James Bernard, the founder of the first Singapore Police Force in 1819. The Singapore Chronicle, the first newspaper in Singapore, was established with Bernard as owner, publisher and editor in 1824 and he opened up Katong, now a densely populated residential enclave, by being the first cultivating a coconut estate there in 1823. Bernard had married in 1818 Trudeau's 4th great-grandmother Esther Farquhar, eldest daughter of Scotsman William Farquhar, a noted colonial leader of Singapore, by Farquhar's first wife, Antoinette « Nonio » Clement, daughter of a French father and an ethnic Malaccan mother, which makes Trudeau the first Canadian prime minister to have verified non-European ancestry.[1] 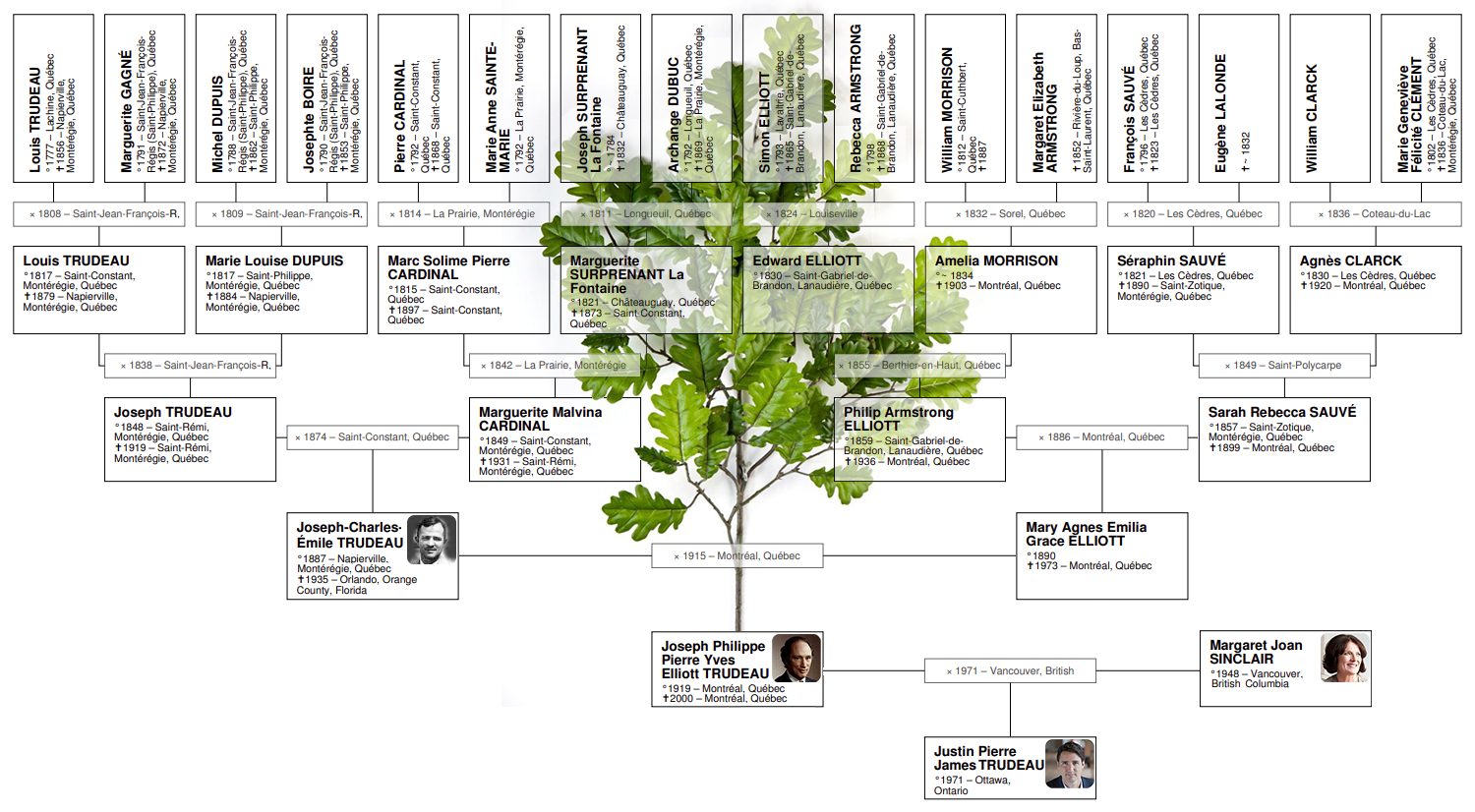 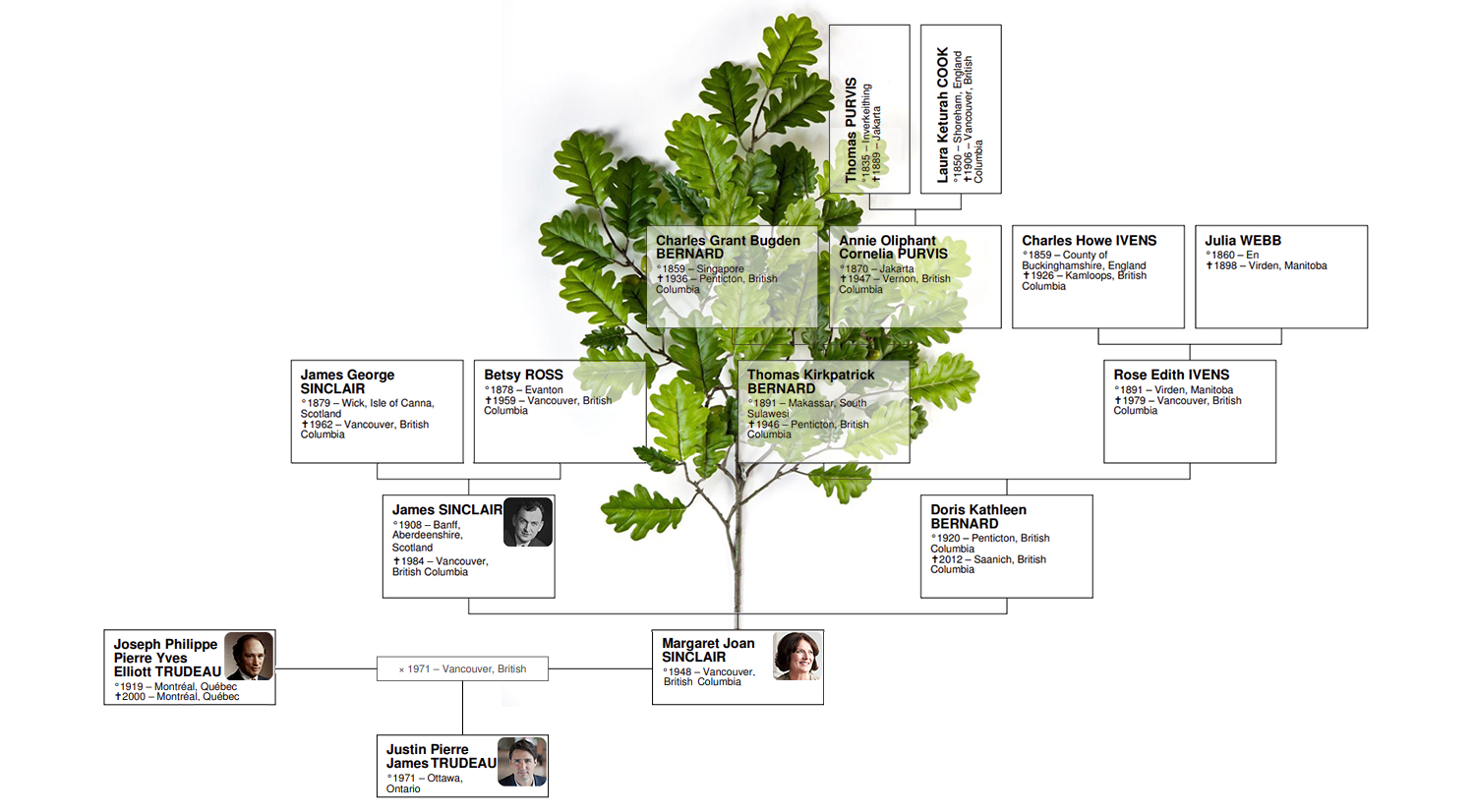 Etienne Truteau, the patronymic ancestor of all North American Trudeau

The first direct ancestor of Justin and Pierre Elliott Trudeau is Etienne Truteau, born on June 8, 1641 in La Rochelle (France). He was christened on September 15, 1641 in Sainte-Marguerite chapel of the parish Notre-Dame-de-Cougnes.

On June 8, 1659, this carpenter signs a 3-year contract for 100 pounds per year with Mr. de la Dauversiere on behalf of Mr. de Queylus. He arrives in Quebec on September 7, 1659 and reaches Ville-Marie a few weeks later on September 29. As a popular carpenter, Etienne Truteau built most of the primitive houses of Montreal and was very active in the region working with master-masons.

Aged 25, Etienne married on January 10, 1667, Adrienne Barbier, daughter of one of the very first settlers of Montreal, Gilles Barbier, originated from Decize in Burgundy (France).

The couple had at least fourteen children of which thirteen sons. Etienne died aged 70 and is buried on July 22, 1712 in Montreal. His wife Adrienne Barbier died around 1721.

For instance, the Percheron pioneer Zacharie Cloutier, an ancestor of most of the celebrities mentioned before, who was born in Mortagne-au-Perche (France). 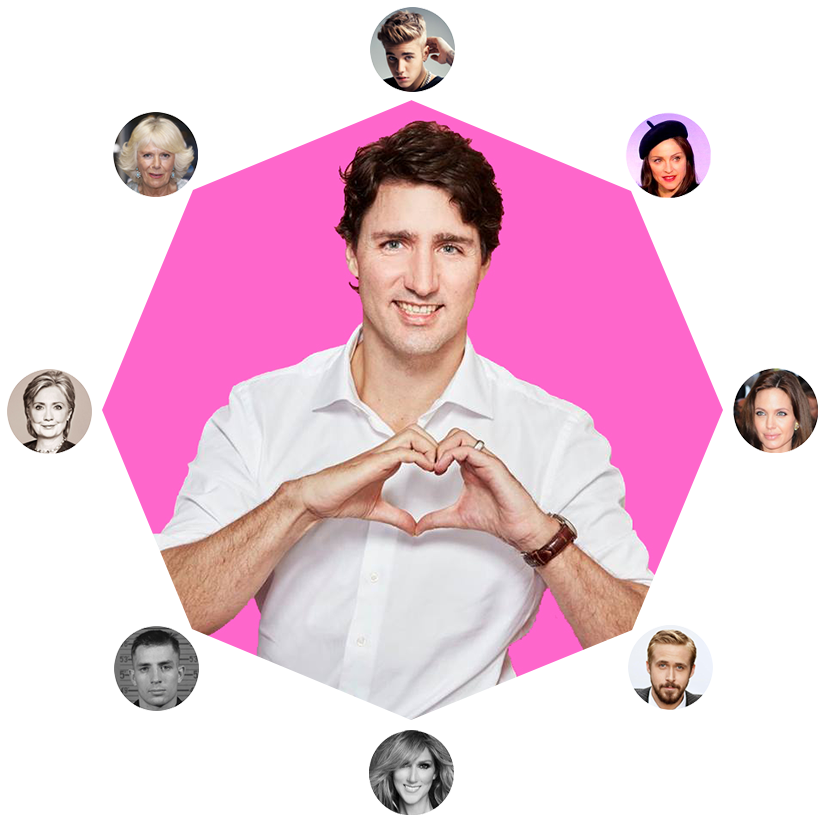 source & infographics perche-quebec.com
Prime Minister Justin Trudeau has many family ties with the famous descendants of those Percheron pioneers.

The Ancestry of Justin Trudeau is published by perche-quebec.com on Geneanet, an external website. Access to the entire database is free but after consulting some data, you must have a free Geneanet account to continue exploring genealogical data.

The Percheron ancestors of Justin Trudeau

perche-quebec.com has identified more than twenty Justin Trudeau’s ancestors whose the origin is Perche (France) in his paternal lineage. All immigrated in the 17th century.