In her autobiography Living History[1], Hillary Rodham Clinton describes her maternal grandmother, Della Murray, as « one of nine children from a family of French Canadian, Scottish and Native American ancestry ».

In 2007, the genealogist Gail F. Moreau-DesHarnais and her team confirmed the presence of French emigrants, including some from Perche, in the ancestry of Hillary Clinton[2]. Regarding the claimed Native American ancestry, no records have been found to support this statement and the genealogist E.H. Hail published in 2015 an article largely based on work by William Addams Reitwiesner[3] which proves that Hillary Clinton has no Amerindian ancestry[4].
The ethnic breakdown of Hillary Clinton’s ancestry, as far as is currently known, can be shown as follows:
— 43.8% England (of which most comes from Northeast England)
— 31.2% Wales
— 13.3% Scotland
— 6.7% France (6.25% emigrated in the 1830s)
— 4.9% French Canada (Quebec, etc.)
— 0.1% Holland

«My mother, Dorothy Howell Rodham, was a homemaker whose days revolved around me and my two younger brothers, and my father, Hugh E. Rodham, owned a small business. » writes Hillary Rodham Clinton in her memoirs.

While speaking in Iowa about immigration policy in April 2015, Hillary Clinton claimed that all of her grandparents were immigrants. ”All my grandparents, you know, came over here and … my grandfather went to work in a lace mill in Scranton, Pennsylvania, and worked there until he retired at 65,” she said. This statement is partly incorrect because only one of her grandparents - Hugh Rodham Sr. , that lace factory worker - immigrated from England to the U.S. as a child. The rest were born in the US.

Hannah Jones was born in June 1882 in Pennsylvania. « It was in America that Hannah Jones met Hugh Rodham, part of the Rodham family who had travelled to America two years earlier from Northumberland. But the circumstances of their marriage reveal the poverty the Jones family endured and the wide social gulf between the Rodhams and Joneses at that time. The pair eloped to Binghampton in New York to get married - a place akin to Gretna Green where people would often go to wed because regulations were less strict. From the family histories of the Jones and Rodham families, it appears the pair may have been forced to elope because the Rodhams were unlikely to have approved of their son marrying a woman from such a poor family when they had managed to become moderately wealthy after emigrating to America. [...] The Jones family were all miners while the Rodhams - who were to become Hannah Jones' in-laws - had left the trade after arriving in the US, and one even became a physician. »[5] Hannah Jones died in 1952.

My maternal grandparents [#6 & #7 above] were certainly not ready for parenthood. Della essentially abandoned my mother when she was only three or four, leaving her alone all day for days on end with meal tickets to use at a restaurant near their five-story walk-up apartment on Chicago’s South Side.

Della Murray was born on June 17, 1902 in Aurora, IL, daughter of Daniel Murray and Delia Martin. She is only 16 years old when she married Edwin John Howell, Jr., a 20 year old boy in Chicago in 1918. The following year, the couple has a first daughter, Dorothy, Hillary's mother.

In 1927, Hillary’s young grandparents finally got a divorce. «They sent their daughters from Chicago by train to live with their paternal grandparents in Alhambra, a town near the San Gabriel Mountains east of Los Angeles. (…) [Dorothy] stayed in California for ten years, never seeing her mother and rarely seeing her father. (…) When she graduated from high school, my mother made plans to go to college in California. But Della contacted her for the first time in ten years and asked her to come live with her in Chicago. Della had recently remarried and promised my mother that she and her new husband [Max Rosenberg 1901-1984] would pay for her education there. When my mother arrived in Chicago, however, she found that Della wanted her only as a housekeeper and that she would get no financial help for college. (…) Heartsick, she moved into a small apartment and found an office job.»

Hillary describes her grandmother Della «as a weak and self-indulgent woman wrapped up in television soap operas and disengaged from reality.»

Della Murray died on March 25, 1960 at the age of 57 in Miami at Jackson Memorial Hospital.

Although the maternal grandfather of Della Murray, Antoine Martin, was born in France in 1813, it is in the ancestry of his wife, Mary Anne Frances McDougall that he married on June 22, 1841 in Windsor (Ontario) that the ancestors of French-Canadian origin of Hillary Rodham Clinton can be found.

Seven of Hillary Clinton’s eight great-grandparents originate in Britain primarily from Northern England and Wales, five of them were immigrants. Those seven British lines enter Canada or the U.S. between the 1830s and 1880s, mostly in the latter decades of that range, which makes Hillary Clinton’s family tree a relatively young one in the US. The eighth ancestral branch originates mainly in France but also includes French Canadian, Scottish and Dutch ancestry.

The short biographies below are largely inspired by an article of E.H Hail published in 2015 which was based on work by William Addams Reitwiesner [3] [4].

Jonathan Rodham was born 1843 in County Durham, Northeast England. He died in September 1917 in Scranton, Pennsylvania, four months to the day after his wife’s death.
Personal ancestry: All his ancestors were apparently living in County Durham in England back to the mid-1700s at least.
Marriage: 1860s in Durham, England.

Personal ancestry: Her ancestors lived in County Northumberland, Northeast England, going back at least to the early 1800s.
Marriage: 1860s in Durham, England.
Occupations: Her father was a coal miner, as was her husband (#8 above). She had eleven children.
Immigration: She immigrated to the U.S. with eight children in 1882 (three more were born in the US).

Personal ancestry: Presumably Wales (no further info.)
Occupations: From an early age supported her widowed mother. Official records show she was working as a servant by the age of 12 but in reality she may have been working even earlier. Her husband was a coal miner and later a teamster. Hillary Clinton says Mary’s family was full of coal miners.
Immigration: From Wales to the U.S. in 1879 with her husband.
Descendants: Hillary Clinton's grandmother Hannah Jones is one of four children out of 14 born to survive. Hannah Jones then eloped with Hugh Rodham - Mrs Clinton's grandfather - to marry because his family probably disproved of her poor background.

Personal ancestry: This man’s parents were both born in County Gloucester, England in the 1840s; two grandparents were born in Wales and two were born in Southwest England (County Somerset).
Marriage: 1894 near Chicago, Illinois
Immigration: From England to Chicagoland, sometime in the 1880s or early 1890s. He later moved to Southern California (1920s).

Personal ancestry: Her father John Monk (1838-1916) was born in New York to then-recent immigrants from England (County Warwick, West Midlands. He married an English-born woman (Sarah Abbs, b.1841) in 1867 and winds up living in Canada a while, before returning to the U.S. in the 1870s, and then to Elgin in the 1880s. The personal ancestry of John Monk (father of #6) is entirely in County Warwick, in England’s West Midlands region, back deep into the 1700s.
Marriage: 1894 near Chicago, Illinois.
Immigration: Emma Monk emigrated from Canada to Detroit, Michigan as a girl sometime in the 1870s. She moved again in 1880s to Chicago. This line ultimately entered the U.S. in the 1830s (paternal grandparents) and 1840s or 1850s (mother).

Personal ancestry: Delia’s father, Antoine Martin, born in Brouviller (Moselle, France) in 1813, emigrated to Canada as a young man, probably in the 1830s (he marries in Canada in 1841). His ancestors were all French going back to the mid-1700s. As for Delia’s mother (Mary Anne Frances McDougall, 1823-1898), she has the longest personal history in North America of anyone profiled in Hillary Clinton’s ancestral tree. She was of fully Colonial frontier stock. All four of her grandparents were born in Detroit in the 1750s and 1760s, when it was a French frontier fort town, a large village of a few hundred people having grown up around it. Detroit was captured by the British in 1760 and by the 1790s was absorbed into the United States. As for Anne Frances McDougall’s personal ancestry, three of her eight great-grandparents were born in early Detroit in the 1730s, four others were born in French Quebec, and one was born in Scotland (from which the McDougall surname originates).
Marriage: 1882 in Detroit, Michigan.
Immigration: Delia Martin was native to North America going back very far, but there is no evidence of any American Indian ancestry at all[4]. Her father (1813-ca.1872) immigrated from France to Ontario, Canada probably in the 1830s. Her parents immigrated to the U.S. sometimes between their marriage in 1841 and 1861 when Delia (#15 here) was born.
Descendants: Same as #14 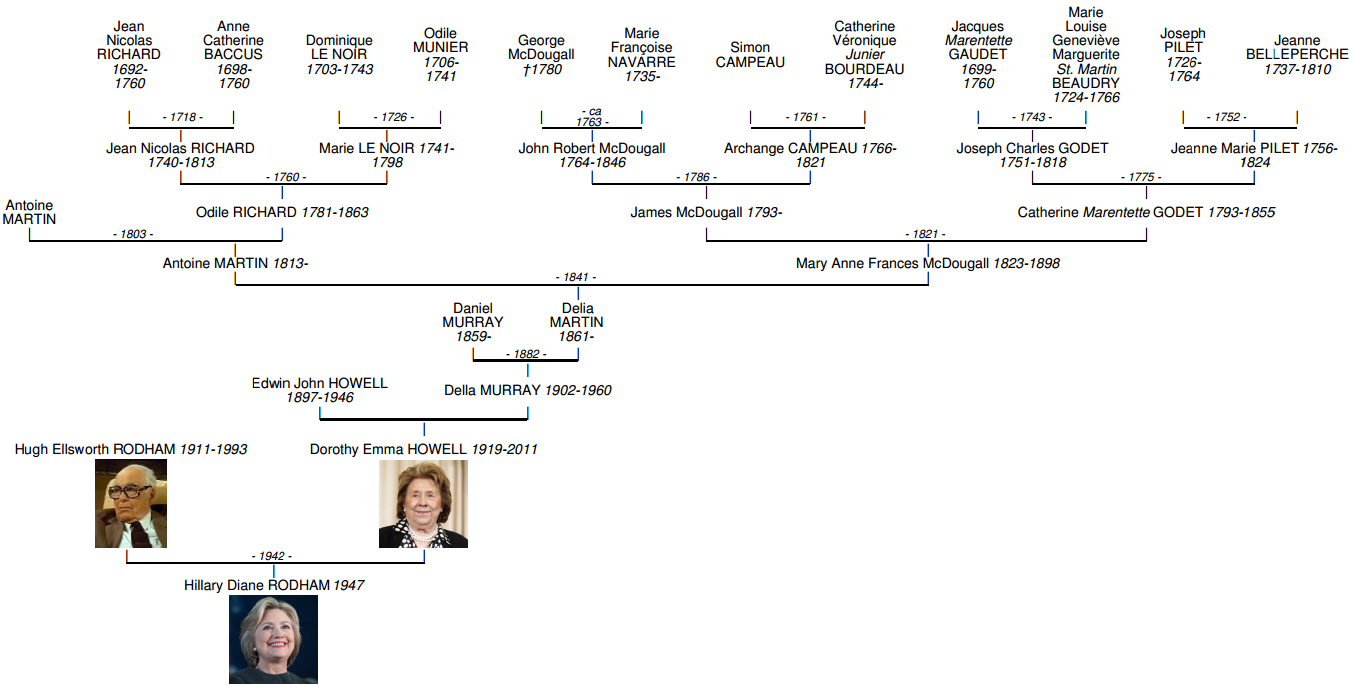 perche-quebec.com has discovered that Hillary Clinton has many family ties with other celebrities in politics (Justin Trudeau), music (Madonna, Celine Dion, Justin Bieber), the film industry (Ryan Gosling, Angelina Jolie) and royalty (Camilla Parker-Bowles)! All those celebrities have in common French-Canadian pioneers, and in particular Percheron pioneers.

For instance, Catherine Godet (1793-1855), the mother of Mary Anne Frances McDougall, is a direct descendant of Percheron pioneer Nicolas Godé, an emigrant originating from the vicinity of Igé (Orne, France).

Moreover, Pierre Gagné, a pioneer from Igé like Nicolas Godé is represented in the ancestry of James McDougall, the father of Mary Anne Frances McDougall. This makes Hillary Clinton a relative of Celine Dion and Madonna.

Angelina Jolie has several Percheron ancestors but none are common with Hillary Clinton. Their common ancestor is the Normand Jean Cusson, originating from the vicinity of Rouen (France).

As strange as it may seem, there is nothing exceptional about those family ties. As Percheron pioneers were among the very first French emigrants to settle in New France, most of North Americans with French-Canadian ancestry have Percheron blood and are more or less related. 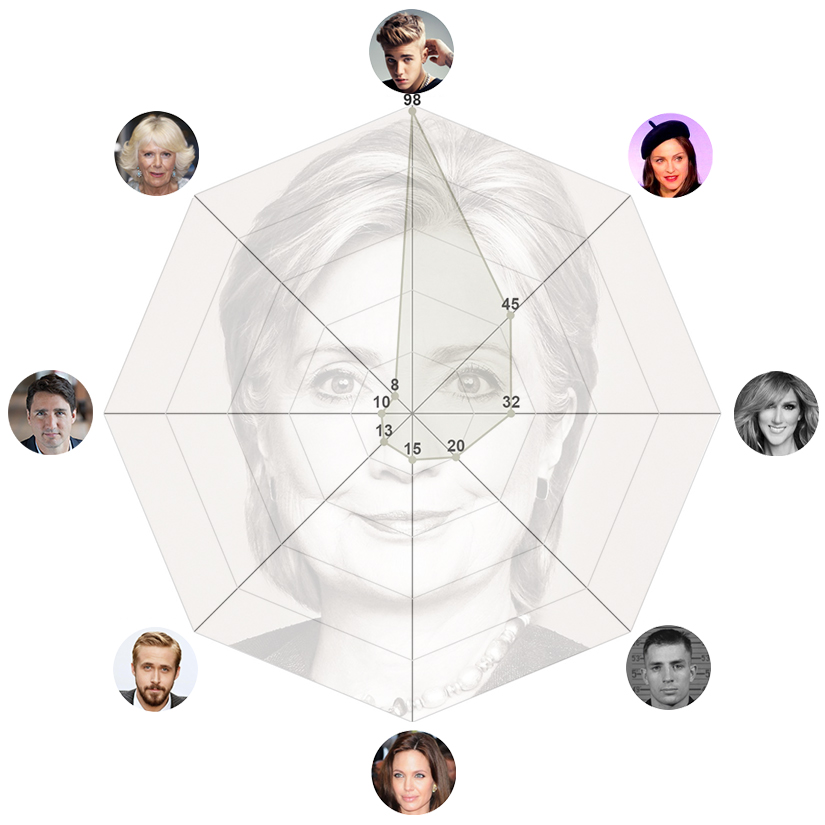 source & infographics perche-quebec.com
Hillary Clinton has many family ties with the famous descendants of those Percherons pioneers.

Cousin with Angelina Jolie and Madonna