Ryan Thomas Gosling was born on November 12, 1980 in London, Ontario (Canada). He is the son of Thomas Ray Gosling, a traveling salesman for a paper mill, and Donna, a secretary who qualified as a high school teacher in 2011.

Gosling's parents were Mormons, and Gosling has said that the religion influenced every aspect of their lives. Because of his father's work, they moved around a lot and Gosling lived in both Cornwall, Ontario, and Burlington, Ontario. His parents divorced when he was a child, and he and his older sister Mandi lived with their mother. His father is of part French-Canadian descent.

The ethnic origins of Ryan Gosling's ancestors are multiple; although the majority of the ancestors are from England and France, a smaller number come from Ireland, Belgium and Monaco.

Ryan Gosling has black ancestors. In the registers of Saint-André-d'Argenteuil parish, a death certificate dated October 10th, 1850, attracts attention. Marie Trottier is said to be « femme de couleur épouse de Jacques James Robertson (Robinson) ». In other acts, her husband is described as «Negro». In the book « Les noirs du Québec 1629-1900 » by Daniel Gay (Cahiers des Amériques, Les Editions du Septentrion 2004), it is mentioned « 1806 Rigaud, the Black Jack Robertson or Robinson marries the Quebecois Marie Trottier ». No record of their marriage has yet been found in the registers. More information on this couple is available here.

A lot of French-Canadian ancestors

perche-quebec.com has discovered that Ryan Gosling has many family ties with other celebrities in the film industry (Angelina Jolie, Xavier Dolan), politics (Hillary Clinton, Justin Trudeau), and music (Madonna, Justin Bieber, Celine Dion, Alanis Morissette). All those celebrities have in common French-Canadian pioneers, and in particular Percheron pioneers.

As strange as it may seem, there is nothing exceptional about those family ties. As the Percheron pioneers were among the very first French emigrants to settle in New France, most of North Americans with French-Canadian ancestry have Percheron blood and are more or less related. 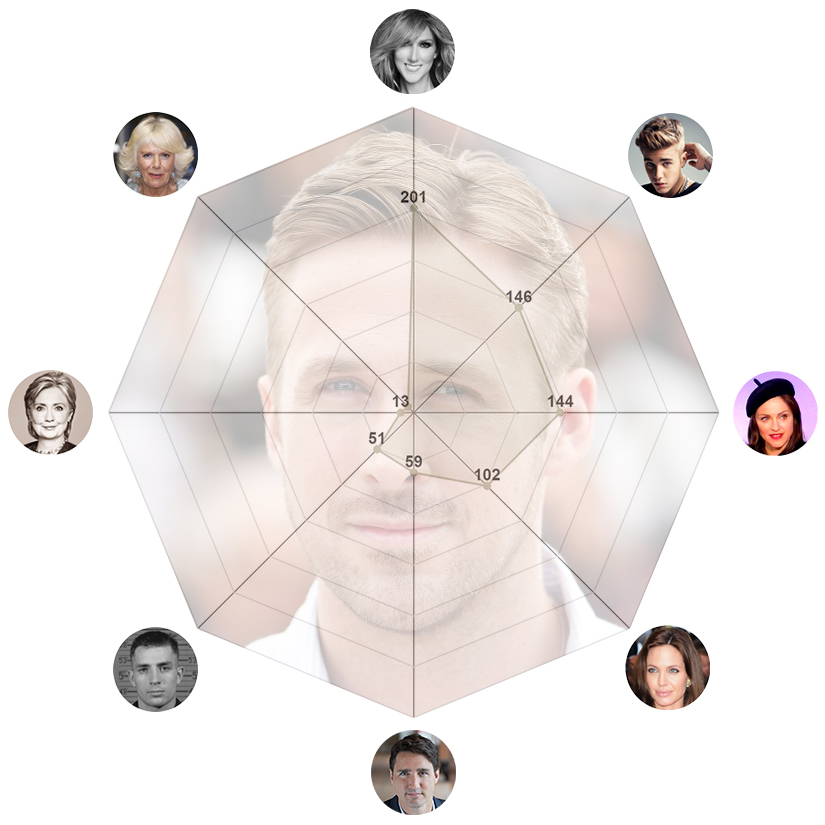 source & infographics perche-quebec.com
Ryan Gosling has many family ties with the famous descendants of those Percherons pioneers.

The Percheron ancestors of Ryan Gosling

The French ancestors of Ryan Gosling are present in the family trees of his paternal grandmother, Mary Yvette Brown, and his two maternal mothers, Marie Georgina Victoria Dextras and Rose Emma Lalonde.
Among them, perche-quebec.com has identified 31 pioneer ancestors originating from Perche (France). All immigrated in the 17th century.